Stillfleet is a new tabletop RPG about exploring ruined spacecraft—hulks—and habitable earth-like planets, cut off from contact with Terra for decades or centuries—rocks.

This 46-page module—our first—contains the rules for playing the 6 basic classes and 12 basic species in Stillfleet, along with three optional rules for generating unique character backgrounds and all of the basic weapons and armor. There are space bears, giant bugs, salamanderoids, haunted double-techno-"elves," and grenades.

Download the Quickstart (pay what you want!) for the game's core rules and eight pregenerated characters.

If you enjoy Stillfleet, please consider supporting us on Patreon. We'll be releasing more modules soon, building toward the full Core Rulebook.

In the mean time, join us on Discord. Feedback is welcome, and we're always organizing games.

Many thanks to all of our playtesters, including the cast of the amazing podcast Fun City!

"Xenotheoretically oriented Archivists are split as to whether shoodtha are Escheresque in origin; no evidence exists either way, and the xenos themselves claim to have forgotten."

From the book, an example of real play:

In the back of a factory for growing medicinal fungi on the minor province of Carlivago, Hune (a provincial stillrijder) watches as his party’s witness calmly explains to a quartet of thugs with badges that they were not in fact hacking into the Pharmacological Guild’s database. (They were.)

The witness rolls her high CHA/control (deceive) against the gendarmes’ WIL/resist other, a d8. Feeling confident, she does not boost this check—and promptly rolls a 2. The gendarme capetan gets a 3, meaning that he sees through her lies. The other thugs move to put the party’s banshee into manacles…

Everyone rolls MOV/initiate to determine the order of events that follow. Hune gets a 9 and acts first. He needs to prevent these gendarmes from disrupting the party’s mission—to stamp out a mi-go conspiracy here on Carlivago—and unlike the witness, he is eager to burn GRT.

Hune’s player tells the GM that he is going to use double tap to attack the nearest gendarme twice with his exosuit’s bone-crushing force fists. He must spend 10 total GRT (6 to attack twice, and 2 for each powered attack). That’s a large percentage of his GRT.

Hune now gets to roll 2d20 to determine how much damage his force fists deal. He can see that the gendarme is wearing bend (plastic) armor, and he has no idea how much HEA this opponent has. He considers burning his remaining 6 GRT to boost each of his damage rolls by +3, guaranteeing at least 8 damage (and probably much more).

Opting for a more dramatic conclusion, however, Hune chooses to use the power slay. He burns his final 6 GRT and rolls dCOM again, looking for a 6 or higher. With a roll of 10, he’s in the clear: Hune’s force fists punch the hapless gendarme’s head clean off of his body, no damage roll required…

In order to download this game you must purchase it at or above the minimum price of $9 USD. You will get access to the following files: 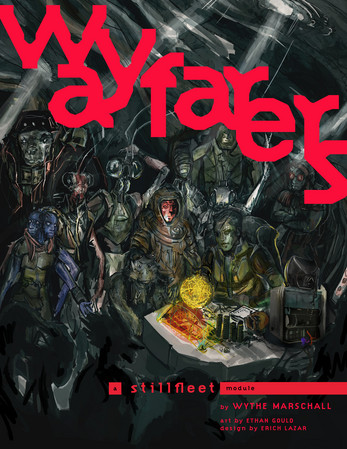 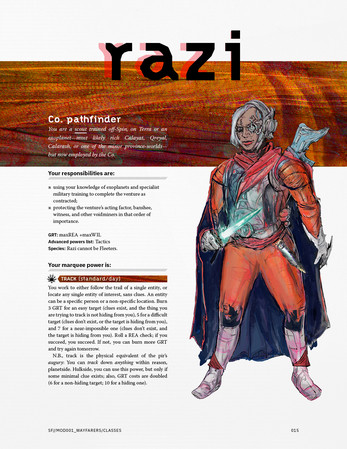 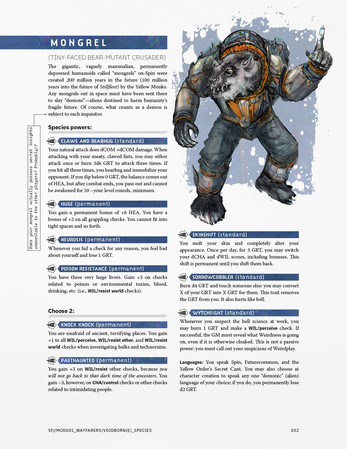 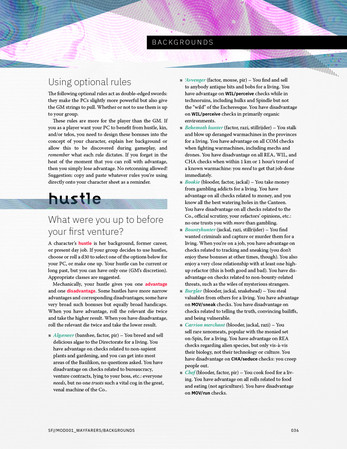 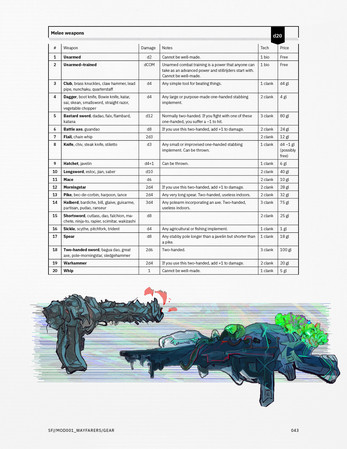